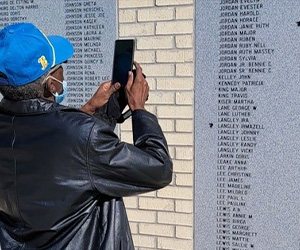 The City of Athens was presented a Municipal Excellence Award in City Spirit last week during the Texas Municipal League's 110th Annual Conference and Exhibition in San Antonio.

"The 2022 Texas Municipal League Municipal Excellence Awards recognize and encourage the achievements of Texas cities in meeting the challenge of municipal government," according to the TML website. "Innovative problem-solving, excellence in management, increasing citizen participation, and reaching toward higher service levels are all daily occurrences in Texas cities, and they deserve recognition.

The award was presented for work to complete the Memorial Legacy Wall to honor students who attended Blackshear, Fisher, and Bishop Heights schools during segregation in Athens.

"The wall serves as an homage to the first public school for African Americans in the area," reads the award submission. "It started off in a church more than 100 years ago. The original structure was demolished in the 1970s. The wall ensures steps are taken to preserve the memory of administration, faculty, staff and students who attended the Blackshear, Fisher, Bishop Heights Schools."

There are currently 1,640 names of administration, faculty, staff and students engraved on the wall with more expected to be added.

“This award is a testament to the tireless efforts of the volunteers with Building Athens Together and the dedicated city staff members who helped see the project through," said Mayor Toni Garrard Clay. "Thanks to them, the memorial wall is something our community can be proud of for years to come.”

The project was accomplished through partnerships with the City of Athens, Athens Economic Development Corporation, Building Athens Together, charitable foundations such as the Murchison and Cain foundations, Trinity Valley Electric Cooperative Charitable Foundation, BAM Diversified, Hollis Driskoll-Architect, and other private citizens, business donors, and many others who worked for two years to make the wall a reality.

This project took 18-months to finish and was conceived of and spearheaded by Building Athens Together. It provides an opportunity to bring together diverse groups and improve communications and relationships.